In July and August, our extended family got together to celebrate Peter and Madeline’s 50th wedding anniversary. My parents have achieved a notable milestone. Our family is blessed and fortunate to have both sets of grandparents still active and engaged in our lives.

In July we took an eight-day cruise to Alaska and Canada. In early August we gathered at my parents’ home in New Harmony and from there took outings to Lehman Caves in Nevada and Vickey’s brother’s backyard oasis in St. George where he’s built an amazing multilevel swimming pool, deck and outdoor eating area. He operates Oasis Pools in St. George, so he knows what he’s doing.

My parents paid for most of our Alaskan cruise, so we have their kindness to thank for this experience we wouldn’t have had without their generosity. Our individual families choose and paid for excursions and trip extras.

All 16 of us — grandparents, me and my three siblings and each of our spouses and kids — sailed on the Norwegian Pearl out of Seattle. Our first stop was Juneau, Alaska, followed the next day by Skagway. Then we spent a day on the boat where we experienced the grandeur of Glacier Bay. After that, Ketchikan and finally Victoria, British Columbia in Canada. 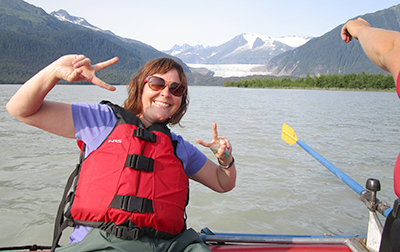 We all took the Mendenhall Glacier Float Trip in Juneau where we enjoyed some short Class II rapids. We saw dozens and dozens of bald eagles hunting for salmon. Many of us tried king crab legs, but eating fish isn’t my thing (makes me sick), so I didn’t participate in that. 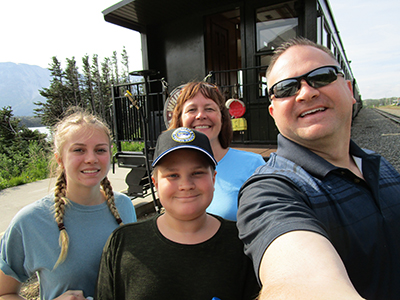 In Skagway, Vickey’s amazing friend and former BYU roommate, Allyson, who works for White Pass and Yukon Route Railroad, met our family as we boarded the train and then led a personally guided car tour of the Yukon. The scenery from the railway was beautiful and stories of the gold rush in the area — the reason the railroad was built — were incredible.

Our afternoon in Skagway was filled to the brim with an awesome excursion — my favorite of the trip — the Grizzly Falls Ziplining Expedition. If you’re ever in Skagway with a few hours to kill, this is a must-do. The zipline was thrilling. So was the ride in the Mercedes-Benz Unimog to get us up and down the mountain. Vickey, who’s afraid of heights, took it in stride and jumped off platform after platform, all built high above the mountainside in the treetops (it felt like we were in the Star Wars Ewok village). We zipped over manmade bridges and babbling mountain streams. The longest stretch of the dozen ziplines took about 30 seconds to traverse. I accepted the challenge of one of our guides to try a flip as I jumped from one platform. But, I didn’t rotate far enough, and my torso flipped back to the upright position quickly, giving my left tricep quite a licking from the harness rope that included a major rope burn and an arm-full of bruising (and there are photos to prove it). Still, I wouldn’t have done anything differently. It was a blast. 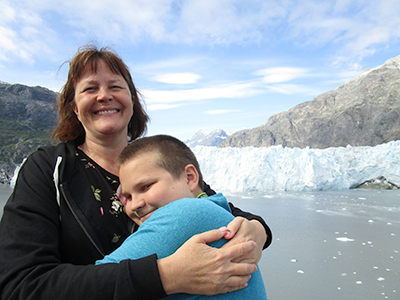 The next day we didn’t leave the boat, but we sailed through Glacier Bay National Park and Preserve. A few national park rangers joined our cruise to narrate (and lecture) about the glaciers. Even though the glaciers are receding from photos we saw from 50-100 years ago, they were still magnificent and inspiring. As the time in the different bodies of water passed, I found myself a little uncomfortable when a glacier would calve, and people would react in awe and joy. Although the thunderous sound was remarkable, it’s probably not something we should revel in — seeing these giant ice formations shrink and possibly, eventually disappear. (See, I was listening to the lecture.) 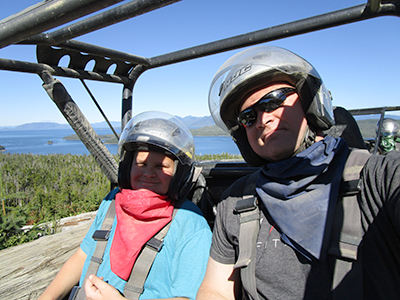 The next morning was a stop in Ketchikan, Alaska. There were a lot of tourist shops near the dock, and it was in one of them that we found our best Alaskan cruise memento — a whale tale hand carved from marble-looking stone, uncovered from the edge of a shrinking glacier. We also went on an excursion as a group, which was our anniversary gift to Grandma and Grandpa Codella.

We went on the Adventure Kart Expedition through the mountains on old logging trails. It was sunny and warm, so instead of getting into rain gear which most groups do, we were instructed to buy bandanas to cover our nose and mouth from the dust the ATVs kick-up. And sure enough, by the time our 60-minute ride was over, we were incredibly dusty. Those clothes came off as soon as we got back to the ship, where they were tossed into plastic bags inside our luggage for washing when we returned.

After Ketchikan, we spent the afternoon on the ship with beautiful, warm and sunny skies, hanging out by the pool and hot tub. One of my beefs with cruise ships is that they suck up salty ocean water for swimming pools which is so cold, and it’s always way too salty to suit my taste. But the hot tub was enjoyable.

Our final cruise day, we stopped in Victoria, British Columbia, Canada and took a shuttle bus to downtown. We explored, shopped and ate some more. While we were there, we happened to see our home LDS stake president and his wife. That was a fun, unexpected encounter and so random that we got to catch up with them in Canada. (I served for four years on the stake high council and was released in May to serve in our ward elders quorum, so it was very nice visiting with President Soffe for a few minutes.)

At midnight, we left the Canadian dock and headed to Seattle. That’s where we said goodbye to the Pearl the next morning. Once we disembarked, I caught a ride to the car rental place, picked up an SUV, went to the dock to get my family and brother-in-law, Vinny, and we left to explore Seattle. 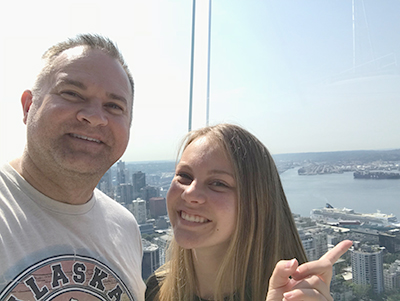 Our first stop was the Space Needle. The new glass around the top of the tower is very cool — and scary for those with height aversions. After that, we spent a few hours at Pike Place Market where we had lunch and explored. Then, we drove to Sea-Tac Airport for us to return home to Salt Lake City and for Vinny to wait for an evening flight to get him back to Vermont.

Other highlights of our cruise included specialty dinners the adults did together, various organized activities and dances, and a few of the entertainment and comedy shows (the ones we could fit into our schedule).

My sister-in-law, Melissa, even managed to win the cruise ship dancing contest with one of the ship’s performers. They thrilled the audience with a lot of awkward dancing and some rolling around on the floor. Her 18-year-old son has a video we sure hope someday makes it to YouTube. 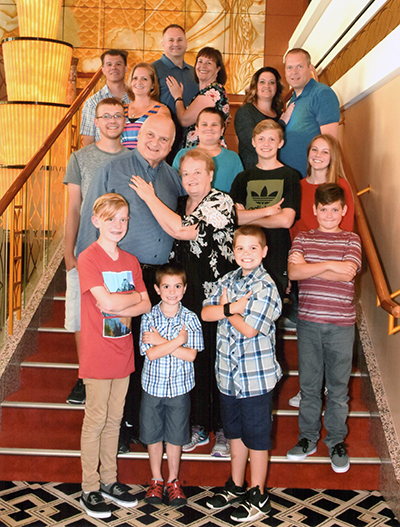 If I went back to Alaska, I’d opt to fly into one of the towns and explore via car, bus, train, boat and plane from there. I found myself feeling a bit claustrophobic and surrounded by too much noise and commotion for eight days on the cruise ship.

And for the record, the most impressive thing about the ship’s food was the quantity, not the quality.

For a 50th wedding anniversary, the cruise was a very nice way for our family to be together, engage in a lot of different activities, and not have to do our own meal preparation or debate for too long about what type of food or which restaurant at which we want to eat. That’s a professional pastime for our family.

Like we told my folks, being married for 50 years is quite remarkable and probably something Vickey and I won’t get to experience — unless we live well into our 80s. I’ve always told Vickey I’ll be ready to go at 70, so… 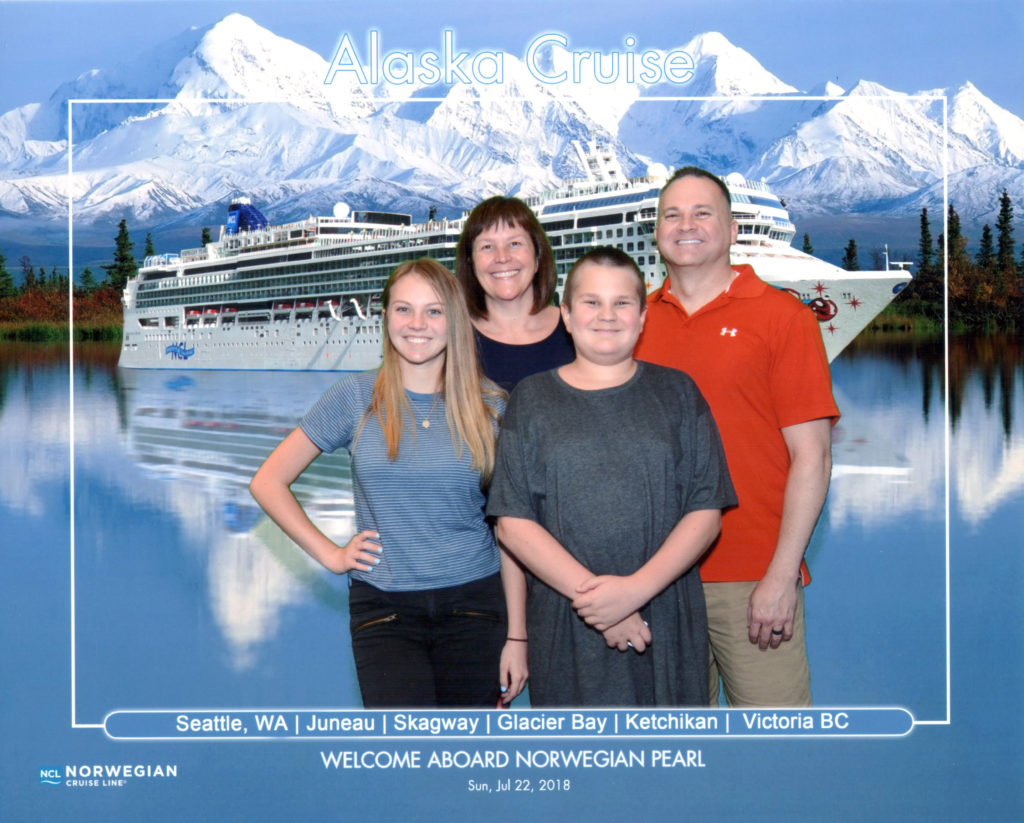