This summer, during a meal at my brother and sister-in-law’s, I enjoyed warm homemade rolls with some absolutely fantabulous jam. I liked it so much I ate almost half of the jar!

So, of course, I had to get the recipe, which my sister-in-law, Melissa, got from her neighbor. So, I’m sharing it here with all of you. 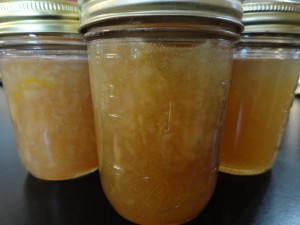 I know it sounds strange, but this jam on warm bread or waffles tastes to me just like hot apple pie. Seriously, it’s one of my new favorite food crushes.

I made six batches of it last night. We did two batches as freezer jam and the rest using a boiling water canning bath so we could store the bottles with our other canned food in the basement.

Place pear, rind (if used), lemon juice and cinnamon in a 3 quart saucepan, stir in pectin.

Bring to a boil, stirring frequently, over high heat.

Stir in sugar, cooking until sugar dissolves, which can take up to five minutes.

After sugar has dissolved, boil for 1 minute, stirring constantly.

Remove from heat, skim foam from the surface and discard.

Stir for 3-5 minutes to ensure the fruit is suspended in the jam.

Place in bottles and secure lids and bands. Let sit for 24 hours.

You can freeze the bottles after they have cooled down, or place them in the refrigerator to cool, and then freeze.

Note: Jam can be refrigerated in bottles or airtight containers for up to 3 weeks, or it can be frozen for up to 6 months.

If you’d rather not put the jam in the freezer, you could take the finished bottles and submerge them in a boiling water canning bath for 10 minutes. Then remove the canner lid, wait 5 minutes, remove jars, cool and store.