When I was a teenager my grandpa, Angelo Codella, taught me how to make a cheesecake. I’ve always had a sweet tooth and for some reason the experience of baking with my grandpa and the simply amazing taste of cheesecake has solidified it as one of my favorite desserts. Yes, I do enjoy eating at The Cheesecake Factory!

I recently ran across this recipe for what’s known as New York City’s best cheesecake. It does taste just like the real thing. I used to bring Junior’s cheesecakes home with me when I would drive upstate to my parents’ place for the weekend while I was working at Merrill Lynch in New York City’s World Financial Center. 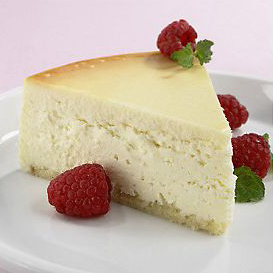 To make the sponge cake layer, combine the cake flour, baking powder and salt in a bowl and set aside.

In a large bowl, with an electric mixer on high speed, beat the egg yolks for 3 minutes. Then, with the mixer still running, gradually add the 1/3 cup sugar and continue beating until thick light-yellow ribbons form in the bowl, about 5 minutes more. Beat in the vanilla and lemon extracts.

Sift the flour mixture over the yolk mixture and stir it in by hand until no more white flecks appear. Blend in the butter.

In a separate bowl, using clean, dry beaters, beat the egg whites and cream of tartar together on high speed until frothy.

Gradually add the 2 tablespoons sugar and continue beating until stiff peaks form. Stir about 1/3 cup of the whites into the batter; then gently fold in the remaining whites (don’t worry if a few white flecks remain).

Gently spoon the batter into the prepared pan. Bake the cake just until the center of the cake springs back when lightly touched, about 10 minutes (watch it carefully, and bake longer in higher altitudes). Let the cake cool in the pan on a wire rack while you make the cream cheese filling. Do not remove the cake from the pan.

To make the cream cheese filling, place one package of the cream cheese, 1/3 cup of the sugar, and the cornstarch in a large bowl. Beat with an electric mixer on low speed until the mixture is creamy, about 3 minutes. Then beat in the remaining 3 packages of cream cheese.

Increase the mixer speed to high and beat in the remaining 1 1/3 cups sugar, then beat in the vanilla. Blend in the eggs, one at a time, beating the batter well after each addition. Blend in the cream. Mix the filling only until completely blended; don’t overmix the batter.

Gently spoon the cream cheese filling on top of the baked sponge cake layer. Wrap the bottom of the pan with foil. Set the springform pan in a large shallow pan and place in oven. Add enough water to the shallow pan to come up about 1 inch up the sides of the springform pan. Bake the cheesecake until the center barely jiggles when you shake the pan, about 1 hour (longer in higher altitudes).

Let the cake cook on a wire rack for 1 hour. Then cover the cake with plastic wrap and refrigerate in the pan until it’s completely cold, at least 4 hours or overnight.

Serve by itself or with your favorite cheesecake topping.