I enjoyed a report on National Public Radio today about the book The Truth About Santa: Wormholes, Robots and What Really Happens on Christmas Eve by author Gregory Mone.

In the interview Mone explained in straightforward scientific detail how Santa Claus accomplishes the task of traversing the world delivering just the right stuff to all the planet’s girls and boys in one night. 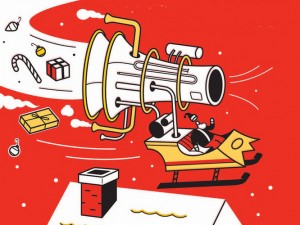 The Truth About Santa: Wormholes, Robots and What Really Happens on Christmas Eve. Photo: Bloomsbury USA

When I courted my wife we discussed the fictional characters endorsed by our culture: the Easter Bunny, the Tooth Fairy and Santa Claus. We were very much in favor of not perpetuating half-truths or encouraging unrealistic expectations.

Interestingly, Vickey has taken to writing fancy notes from the Tooth Fairy and sprinkling glitter around my daughter’s room with a few quarters or dollar left in place of the tooth.

Of course, when we were packing our Bountiful rental home this fall Eliana discovered a bunch of teeth in Vickey’s jewelry box and asked sheepishly whose teeth they were. Vickey asked her whose she thought they were and Eliana responded, “mine.”

So, the Tooth Fairy illusion is pretty much gone now.

But the allure of Santa remains. We haven’t really been Santa evangelists, but we haven’t been Scrooges either.

It has been fun this year to watch Dominic talk about Christmas and the gifts he wants. He’s even been to the mall to visit Santa Claus, tell him what he wants and have his picture taken.

Listening to author Gregory Mone today was fun. It was cool hearing him matter-of-factly explain all that Santa does and accomplishes due to more-advanced-than-we-are technology.

I’m not saying I don’t believe in the spirit of Christmas and the idea of Santa Claus. In fact, I thought Mone’s approach was refreshing.

I am curious to know what approaches other parents have taken, and what experiences they’ve had at Christmastime.

One of my vivid Christmas memories is from when my family lived in Houston, I was 10 or so, and before Christmas I managed to find and identify every single Christmas present for every member of the family. I was so incredibly disappointed on Dec. 25 when there wasn’t one surprise under the tree for me or anyone else in the family. I was sad.

If you’d like a fun explanation of Santa Claus, I highly recommend listening to today’s podcast on NPR.

4 Responses to “The Truth About Santa, a book for our time”