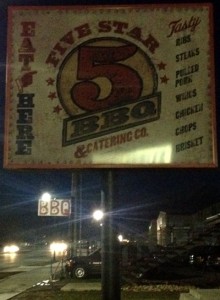 I was invited to join in a blogger’s night at Orem’s relatively new Five Star BBQ & Catering Co. And what a treat it was.

The converted home on Geneva Road is quaint. You walk in the front door to seating on your left and the serving counter in front of you. The guys at the counter serve up the meat and sides. We tried the brisket, pork, chicken and ribs. I’m usually partial to chicken but every meat was delicious.

We also had three sides: mashed potatoes, baked beans and applesauce. The applesauce was my eight year-old son’s request but I have to say, it was just as good as anything else – even tastier than what our family has canned. 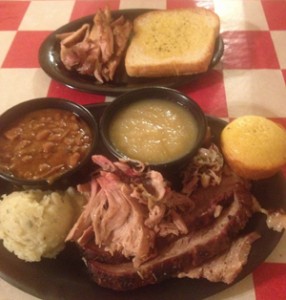 The only thing I would have done differently is provided moist towelettes following the meal, because let me tell you, your fingers and mouth get plenty of lip-smacking good barbecue sauce on them. I had to wash my hands and face in the bathroom before I left.

Another delectable treat was what seemed like dozens of different sauces stored in a small fridge next to the soda machine. All the sauces we tried were great; unique and very tasty. The sweet sauce was particularly good on the pork and chicken, but I’m partial to sweet things. And their house sauce was awesome on the beef. 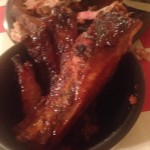 The barbecue is some of the best I’ve had in Utah. I’ve tried lots of barbecue and even lived for seven years in Texas. I’m not just saying this because I was invited to their blogger dinner to celebrate their new evening hours.

Major growing pains. Their food is so good, word will spread. And they’ll be struggling to figure out how to keep up with demand.