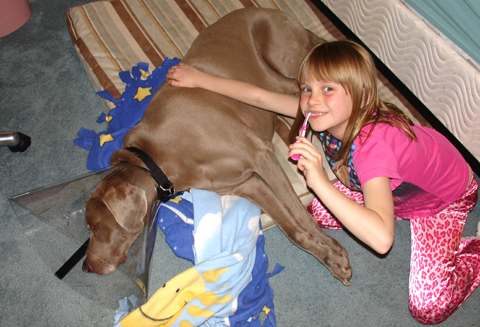 On Mother’s Day we enjoyed a perfect Sunday morning with a good cooked breakfast followed by church services. After lunch we decided to go for a family walk. The weather was just great but our walk became quite an adventure.

We had walked past a neighbor’s home around the block. The kids saw their horses and begged to go in. Since they were out and had previously invited us to drop by to let the kids pet the horses, they neighborly invited us in.

I said I’d stay on the sidewalk with our dog, Tank, while the kids saw the horses, but they insisted Tank and I also come in. I kept Tank on his leash for five minutes or so until they again insisted I let him roam around the fenced yard.

I was hesitant to let Tank roam freely because they had a small poodle-like dog and a black lab and I just wasn’t sure what might happen.

Sure enough, about five minutes later Tank came running over to us with a bloody ear. The black lab and he were going at it on the other side of the garage and their dog got the best of Tank.

About a one-inch chunk of Tank’s right ear was hanging loose with blood dripping everywhere.

So, our Mother’s Day afternoon was spent rushing Tank to the emergency veterinarian and paying $430 for him to be knocked out and sewed up.

At least we got to squeeze our Mother’s Day roast and potatoes dinner in between the time we dropped him off at the vet and the time we had to go pick him up with his newly stitched up ear and plastic cone around his neck so he couldn’t scratch his ear.

The cone comes off on Wednesday. At least that’s what we’re planning, but who knows.

And the neighbor did come over and graciously offered to pay for the vet bill. We split it with him.

That morning the kids and I surprised Vickey with four tickets to the Fourth of July Stadium of Fire concert by Carrie Underwood at BYU’s football stadium.

So between the concert and fireworks tickets and the vet bill, Mother’s Day this year became our most expensive ever.

But that’s okay. Vickey’s worth it. And despite his crazy personality, Tank is too.

For a while the kids were really beside themselves watching Tank bleed all over all of us and himself. Eliana asked if we were going to have to put him down. It took several times of Vickey explaining the vet would have to put him to sleep temporarily to stitch him up but that Tank would not die.

Ellie cried many times that afternoon. She’s an expert crier.

Dominic was concerned, you could tell, but I didn’t see him crying.

Then again I was pretty much focused on tending to Tank.

Gordon was a great help as well. He applied pressure to Tank’s ear until we were able to get it bandaged up and get the dog to the vet.

It was a crazy Mother’s Day. 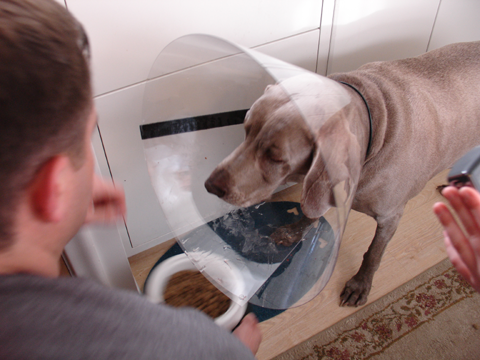