Well, for those of you wondering, Dominic’s cast was removed today around 11:30 a.m.

The doctor and his staff took a couple x-rays and felt there was enough healing to warrant removal of the cast. Then they took another x-ray to look at the bone without interference from the fiberglass cast. Dr. Stewart told us Dominic will probably not want to walk or move around for a few days and that we should just help him take it easy for a while.

We were going to leave without anything on his leg but Dominic put up a pretty big stink once the cast was off. After we dressed him in sweat pants the doctor brought in a temporary, removable leg brace. It’s just a long, skinny fiberglass leg brace wrapped in cotton that rests along the backside of his leg. It’s held on by ace bandages.

At least now we can bathe Dominic and get rid of that awful smell. That’s if he’ll stand for it. He was really upset when we left the doctor’s office and brought him in the house, but now, after an hour, he’s much more calm and back to chillin’ in his sofa chair watching one of his favorite movies, Spirit.

Dr. Stewart asked that we return with Dominic in two weeks so he can take another x-ray.

I really couldn’t see much difference in the x-ray from what I remember five weeks ago. I could still see a separation between the upper and lower portions of the femur. The doctor said it was a bad break and will take a few months to heal well.

He also said Dominic’s joints will hurt since they were immobile for the past five weeks and that he’ll just have to work through the pain. Dominic’s threshold for pain seems to be rather low (thus the crying fit after removal of the cast) so we’ll see how he does with that.

My concern is for the long-term, that his leg will heal completely and he won’t have a reoccurring problem with it. Only time will tell, I suppose.

For now, we’re still waiting on Dominic. We’re just glad we can diaper him normally. When this all started I nicknamed him subway because he smells like one. At least now he can take a bath. 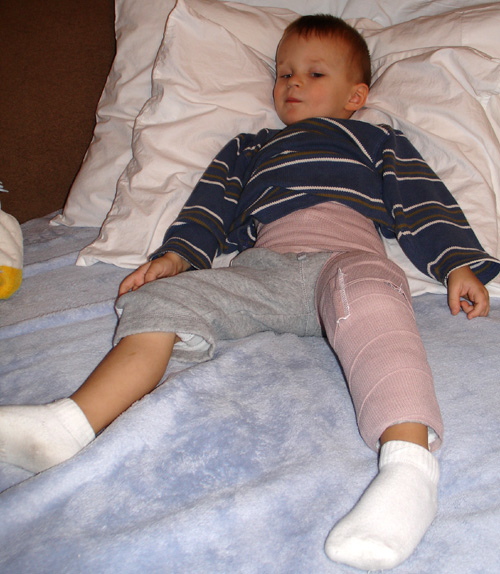