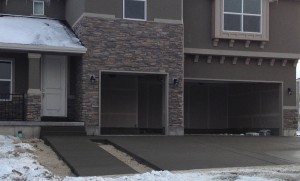 2013 started out with a move from Bountiful to South Jordan, Utah. It was an on-again, off-again stressful move, instigated by Pete working in Lindon (50 miles south of our Bountiful home), that finally happened the second week of January. We’re happy to be in a brand new home and enjoying (while simultaneously dreading) all the work that comes with that. For an example, check out photos from our ongoing landscaping project.

Vickey and the kids finished last year’s school year in Bountiful then started teaching and going to school in the Jordan District this fall. The kids seem to enjoy their new school and we really like that the school follows FranklinCovey’s Leader In Me program. Vickey has had to learn the ropes in the new school district but is still teaching the same curriculum, this time at South Jordan Middle School. She was the girl’s camp director this year, which filled her time after school got out in June until the second week of July. 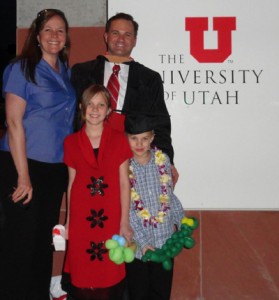 Pete’s the vice president of marketing and public relations for Alexander’s, a print and marketing firm in Utah County. His big accomplishment this year is graduating with an MBA from the University of Utah’s David Eccles School of Business. He says (and Vickey agrees) that two-year experience was the most difficult thing he’s ever done: working full-time, being a husband and father, and going to graduate school.

Eliana turned 12 this year and is enjoying being a young woman. She’s making new friends and doing well in school. She’s also turning into quite a storyteller, writer and actress. She takes piano lessons and will be performing a few songs at the Festival of Trees this year. She got to attend girl’s camp with Vickey and started sixth grade, which means middle school’s just around the corner. 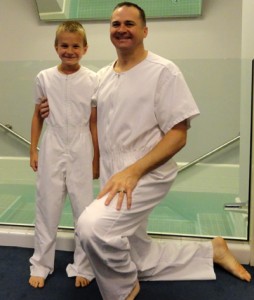 Dominic is 8 and was baptized a member of The Church of Jesus Christ of Latter-day Saints in August. He’s our electronics fanatic. If it has an on/off switch, he’s all over it. He’s now in Cub Scouts and Pete is the Cubmaster. This year he has learned how studying can help him score 100% on his spelling tests and is doing great in third grade.

In April, while Pete was in Berlin with his MBA cohort, our 11 year-old weimaraner, Sir Tank Thunderpaw, left our family. He developed large growths on his kidneys, wouldn’t eat, was incontinent, and we had to put him down. Pete watched on FaceTime while Vickey, the kids and Vickey’s parents said goodbye to Tank. It was a traumatic, very sad experience that broke our hearts. We still miss Tank.

On Halloween this year we attended a Snow family wedding (Vickey’s nephew). Of course it was a costume party. Everyone was dressed up, and although the kids only got to trick-or-treat for 15 minutes or so, we all had a very fun evening. 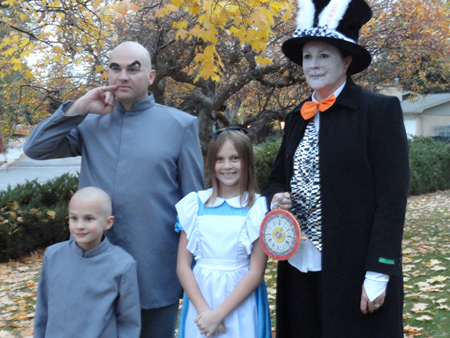 We’re looking forward to spending the holidays with both sides of our family here in Utah. We wish you and yours a safe and healthy holiday season and a happy New Year.

If you need our new home address, please complete this online contact form.