Today Dominic chose to follow the example of Jesus Christ and be baptized. He’s now an official member of The Church of Jesus Christ of Latter-day Saints. I baptized and confirmed him this morning.

The service was at our stake center, the South Jordan Utah River Ridge Stake. Our family was selected for the musical number, so we sang Baptism during the program. There were only four baptismal candidates, so we were in the baptismal font within half-an-hour of the meeting’s start.

When my dad was baptized by LDS missionaries in the 60s, he and the elder slipped and he didn’t accomplish the baptism by immersion part. So he was baptized twice.

Then, when I was eight, somehow my elbow didn’t make it under. So I was baptized twice.

I’m happy to say that for both Eliana and Dominic, I was sure to get them completely immersed. We broke the double baptism streak. 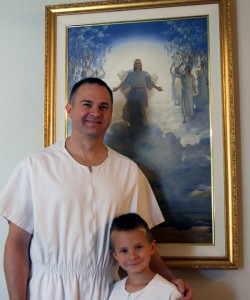 When we came up out of the water, Grandpa Snow was smiling ear to ear. He said later that we looked like we were glowing and both so happy. I thought the same of him – so happy.

I confirmed Dominic with the help of Grandpa Snow, Uncle Brian, Mark Coglianese (who happened to be in Utah helping his brother-in-law and made time to join us this morning), and Joel Hair, a counselor in our bishopric.

Then Vickey and her mom took the opportunity to say a few things and bear their testimonies.

Afterwards we gathered at Kneaders for their all you can eat French toast. Dominic opened gifts and received a new set of scriptures and accessories, and a couple toys.

It was a really great morning.

I spent the afternoon and evening working on our front courtyard project, something I hope to finish up before snow flies this fall — one of the many projects we inherited with our decision to buy a brand new home.