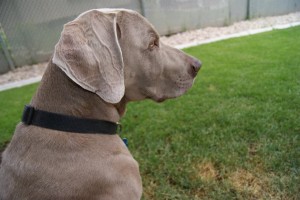 This post is for our dear departed Sir Tank Thunderpaw — our 11 year-old weimaraner who left this life on April 19 during my MBA trip to Berlin.

I’m still so very sad that I missed Tank’s last days with our family. But as I’ve reflected on his life and our time together, I thought it appropriate to share a few observations and lessons learned.

Tank was always happy. Happiness is a choice, you know. Tank chose to be happy and eager.

Tank always greeted us at the door. He was so glad we were home. He cherished family time.

Tank was mischievous, especially when it came to food. One of our favorite Tank memories is when he ate part of a loaf of warm banana bread left on the kitchen counter to cool. Grandma Codella thought the crumbled bread was the result of a failed but tasty recipe, when actually she was finishing off what Tank started.

Tank loved the outdoors. Tank accompanied us on numerous camping and hiking trips. He was an eager explorer and most comfortable when he lead the way.

Tank literally jumped for joy when you mentioned going on a walk. He would sit with his tail polishing the floor, back and forth, while you put on his leash. As soon as the door opened, he was off to the races.

Tank learned to put his shoulder to the wheel. I accept responsibility for Tank’s inability to walk calmly alongside the person walking him. When he was a puppy I would give him exercise by strapping on my rollerblades, connecting his leash, and letting him pull me around our Henderson neighborhood. I called it street skiing. Tank loved it, even in the desert heat.

Tank freely forgave. Even when we had disagreements and I acted in frustration or anger, before long Tank was eager to buddy up and give love.

Tank was all-in. He would play fetch until he was completely—tongue hanging out, panting—exhausted. There was no low gear with Tank. He lived a full steam ahead adrenalin-filled life.

Tank rhymes with Hank. We would occasionally holler at Tank and our friend’s dad, Hank, would think we were speaking rudely to him. That was embarrassing to us and confusing to Hank. But we learned to quickly point out we were talking to the dog, not Hank. Sadly, they’ve both passed on now. Maybe they can hang out every now and then.

Speaking of dads, Tank is the largest dog I’ve ever seen on my dad’s lap. One winter day, instead of letting him sit on the cold garage cement floor while we were outside, my dad had him sit on his lap. Imagine a 100-pound dog on my dad’s lap. That’s a mental picture I’ll never forget. I think they both loved it. 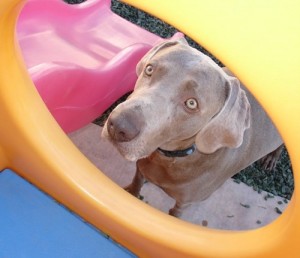 Tank loved to play. Any time the kids ran around, played dress-ups or went exploring, Tank was constantly underfoot, sometimes sporting underwear, pink claws, skirts and wigs, and being lectured in an eerily similar way to how we lecture our kids.

Tank protected the family. One time our exterminator opened the back door to come in without warning us first. Tank was right there to prevent him from coming in, until we explained it was okay.

Tank wasn’t picky. Pretty much any food would be quickly consumed by Tank. For many years he was especially fond of hanging around Dominic, who was born when Tank was 3 (21 in dog years), picking up and snagging out of hand any tidbits of food possible, much to Dominic’s chagrin.

Tank could be stealthy. Many times he’d manage to lift a piece of food right off a plate without a sound or touching anything else. Only a couple of times did he break or damage things when accessing food. Like the time when Vickey forgot she placed a dog bone on one of the top bookshelves to give to him before we left the house. While we were gone he got the dog bone anyway and messed and scratched up the bookshelf getting it. And the time he broke the butter dish so he could consume a whole cube of butter.

Tank loved to cuddle. In his later years Tank would take turns alternating sleeping on the kids’ beds. Usually he curled up and was a good foot warmer, but sometimes he stretched out with his head on the kids’ pillow and his body extending down to the foot of their beds. 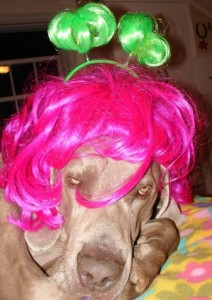 Tank was patient. Growing up with our two kids, Tank would take all kinds of poking, prodding and pulling from the kids and their friends.

Tank was an important part of our family. We miss him tremendously.

Although his last few weeks were marked by lethargy and an inability to hold his urine until we were home to let him out, he was still very present and loving.

Our good friend Steve said it best this way:

Who knew that a gray dog could bring so much color into the world?

So, Sir Tank Thunderpaw, thank you for sharing your life with our family. You are missed. You are loved. And we’ll see you again someday.

Thank you to family and friends who went out of their way to help us say goodbye and comfort us.

You can see a bunch of photos of Tank with our family in this Facebook album.