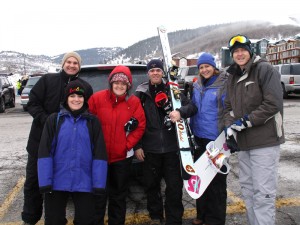 Our skiing crew: me, Joni, Melissa, Vinny, Angie and Brian.

While my entire family was together for Christmas this year in Salt Lake, the siblings and spouses took a day to hit the Park City slopes.

This was probably one of the best Christmas gifts from our parents. They spent the entire day, from sun up to sun down, taking care of their grandchildren, all seven of them.

We bought a set of tickets from Costco for Park City Mountain Resort and enjoyed skiing from about 11 a.m. to 4 p.m.; with some time in the early afternoon set aside for eating at the cafeteria (I haven’t been so hungry for a long time). 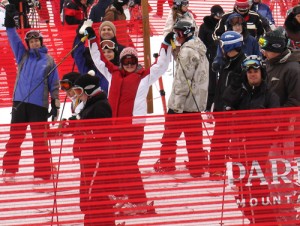 Here we are waiting for our first ride up the lift.

My sister-in-law’s sister, Joni, also joined us. And Vickey took care of all of us by watching our stuff and reserving a lunch table for us. She spent the day in the lodge reading a book. She also stole away and went to downtown Park City to check out her brother’s oil paintings at the Coda Gallery.

My brother-in-law, Vinny, is for all intents and purposes a professional skier. I don’t know that he has actually earned money skiing, but I know he’s been on skis since he was two or three and that he is the most talented skier I personally know.

Up the mountain we go!

In fact, he’s in the process of building a machine to make homemade skis. Sounds crazy, I know. But he and my sister do live in Vermont and those vermonsters, as we affectionately call them, do have strange ways.

Vinny was great at giving us pointers and helping us down the mountain. I was surprised he hung with us the whole day instead of doing his own thing. But he did go skiing several other times during their weeklong visit to Salt Lake City, so I think he still enjoyed some quality alone time on the slopes.

Melissa and Brian at lunch.

This was only the second or third time I’ve been skiing in my entire life. And I think the last time was about fifteen years ago with Angie and Vinny in upstate New York.

Vinny coached me to better control my speed and not go kamikaze down the mountain.

Happily, we all made it okay with just a few sore muscles as a result of our day at the ski resort. 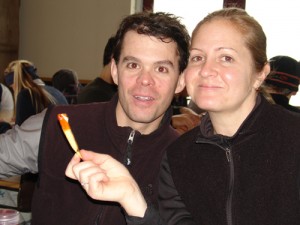 Vinny and Angie at lunch.

Getting home was a bit hairy since it was snowing. Once we were down the mountain it took us almost 90 minutes to make a regularly 40 minute drive across the Salt Lake valley to my brother’s home in South Jordan to get our kids and bring them back home.

But driving that night was nothing like it was for Vinny coming down the mountain last night. It took him a couple hours to get back to the Salt Lake valley from Park City. They flew back home this morning so I’m sure he’s plenty tired after all the skiing and traveling. 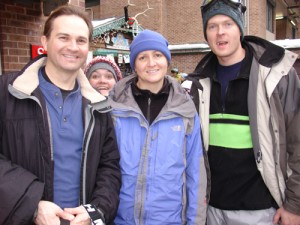 Me, Angie and Brian after turning in our skis. Melissa jumped in at the last minute and is peeking over my left shoulder.

It was great spending the week with my parents and siblings and their families!

Thanks again, Ang, for the ski day. I had a blast! 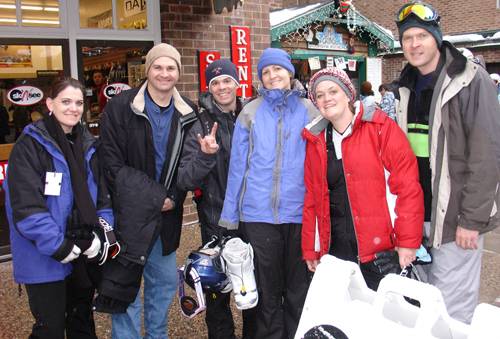 On our way home after a day of skiing. Joni, me, Vinny, Angie, Melissa and Brian.