In September 2014 my daughter, Eliana, and I auditioned to be part of the cast of the LDS Church’s Conference Center musical theater production, Savior of the World.

About 500 people auditioned. After a couple weeks of callbacks, we were invited to be in the red cast, performing on Tuesday, Thursday and Saturday nights from November 22 to January 3.

Our friends, ward members and neighbor’s son, Bryson Dashner, also auditioned and was selected to participate in the production with us.

Our rehearsals started in September and were about five days a week, in the evenings from around 6 to 10 p.m., and for four hours on Saturdays, in the morning or afternoon.

Our preview performances started the week of Nov. 17 with the show opening Friday that week.

Pete as Eli, and Jensen as Nathan –
shepherds in Savior of the World.

I was cast as Eli, the shepherd, while Ellie was asked to participate in the ensemble. I have especially enjoyed portraying one of the shepherds who had the angel appear to him and went to Bethlehem to witness the birth of baby Jesus. Being in a live nativity this season has made Christmas extra special.

We’ve spent many long nights at the Conference Center this fall. And we’ve developed friendships with a couple hundred cast members that we’ll always cherish and remember.

As the production’s performances got underway, we were counseled by one of the producers to not worry about being, and focus instead on giving. 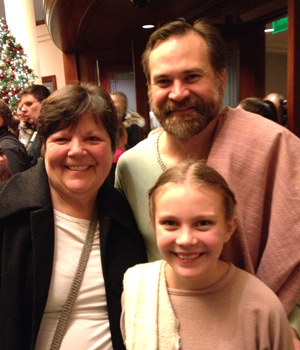 Pete and Ellie after the show with our ward member and neighbor, Linda Worthington.

Being focused on giving of our time and talents in Savior of the World, as well as giving of ourselves this Christmastime, has been a wonderful experience and really brought the Spirit into our lives.

The experience has been so rewarding, especially when we visit with audience members after the show who, when they try to explain how they feel and what the show meant to them, tear up and get choked up.

Heavenly Father’s gift of his Son is, as the show lyrics say, “resplendent and amazing.”

Thank you to everyone who helped make our 2014 Savior of the World experience so memorable. 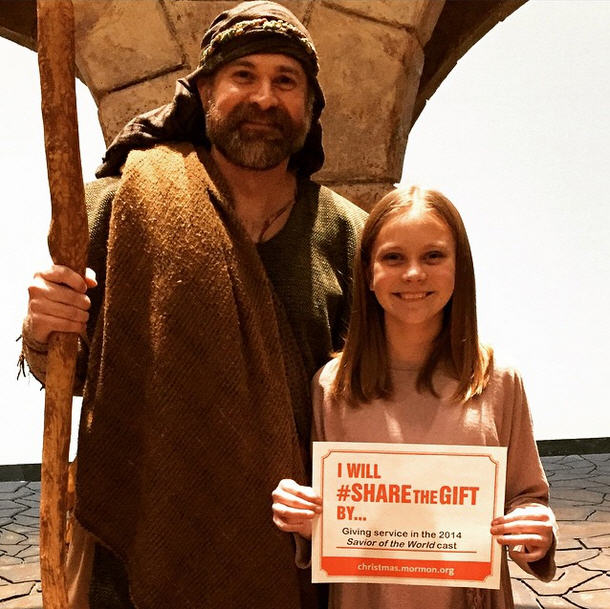 See more photos in my Facebook Savior of the World photo album.